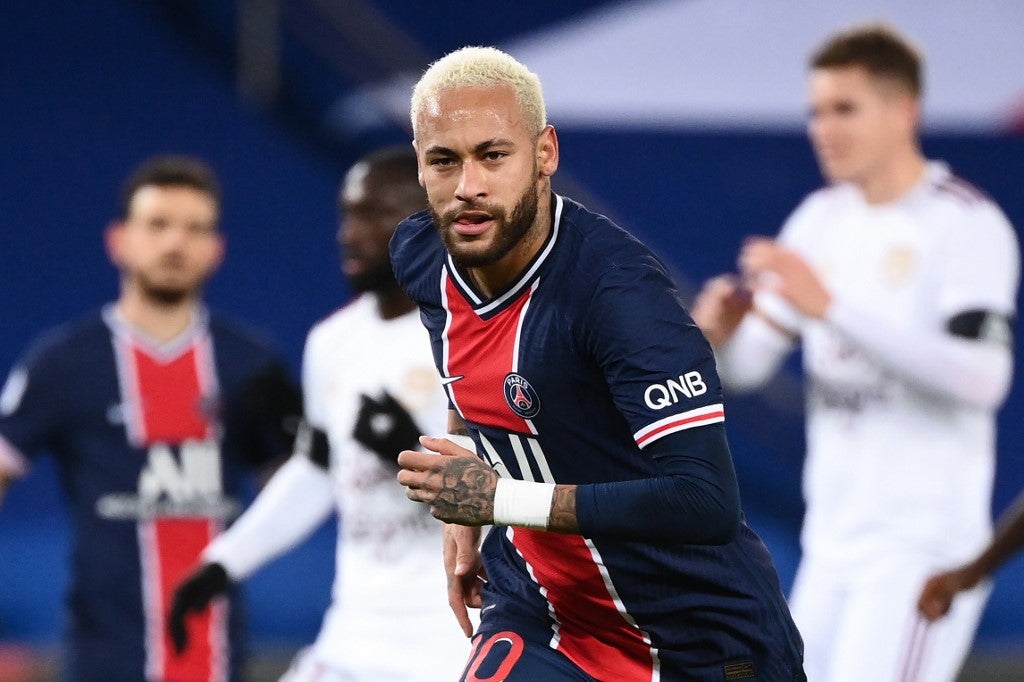 Paris Saint-Germain’s Brazilian forward Neymar celebrates after scoring a goal on a penalty during the French L1 football match between Paris Saint-Germain (PSG) and Girondins de Bordeaux (FCGB) at the Parc de Princes stadium in Paris on November 28, 2020. (Photo by FRANCK FIFE / AFP)

Neymar scored his 50th league goal for Paris Saint-Germain but warned the Ligue 1 leaders needed to improve quickly as they prepared for a crunch European clash with Manchester United by drawing 2-2 with Bordeaux on Saturday.

The world’s most expensive player scored a penalty to cancel out an early Timothee Pembele own goal and become the quickest to reach a half century of league goals in a PSG shirt, outdoing Zlatan Ibrahimovic.

Moise Kean then put PSG in front only for Yacine Adli to fire in a superb second-half equalizer for mid-table Bordeaux, who deserved their draw.

It is a setback for the reigning French champions, a week after they lost 3-2 at Monaco, and nearest challengers Lille can move level on points at the top of the table with victory at Saint-Etienne on Sunday.

“If we don’t improve it’s going to be difficult for us in the league and in the Champions League,” Neymar told Canal Plus ahead of the trip to Old Trafford on Wednesday.

PSG was again missing key players, as has often been the case this season, with goalkeeper Keylor Navas and captain Marquinhos among those absent at an empty Parc des Princes.

Yet, regardless of that, the performance will do little to ease concerns that have been growing since they succeeded in beating RB Leipzig in midweek despite a disjointed display.

“We know how important Wednesday’s match is. It’s decisive. We didn’t play well (against Leipzig) but we won. On Wednesday we will try to play our best game. We need to play more as a team and be better organized, otherwise, it will be difficult,” Neymar added.

A failure to beat United at Old Trafford could leave last season’s Champions League runners-up staring at a group-stage exit from the competition for the first time in the Qatar era.

Bordeaux took a 10th-minute lead when 18-year-old defender Pembele, making his first senior start, turned a corner into his own net as he jumped with Josh Maja at the near post.

PSG honored the late Diego Maradona with a minute’s silence before kick-off and a banner at one end of the empty Parc des Princes which read, in Spanish, ‘Goodbye number 10! Rest in Peace!’.

But, rather than an Argentine, it was their own Brazilian superstar who turned this game around before the half-hour mark.

A foul in the box on the ex-Barcelona forward by Otavio was spotted by the referee following a VAR review, and Neymar rolled in the resulting spot-kick, just as he had done against Leipzig.

Signed for 222 million euros ($264m) in August 2017, Neymar has needed just 58 matches to score 50 goals in Ligue 1, fewer than any other player. Ibrahimovic required 59 games to get to the milestone.

Within a minute of equalizing, PSG went ahead, with goalkeeper Benoit Costil parrying Neymar’s fizzing shot and Kean following in to score his sixth goal since signing on loan from Everton.

PSG should then have put the game to bed but Costil tipped a Kylian Mbappe shot onto the post on 35 minutes and then denied Mbappe again early in the second half when he dived at the feet of the France star.

Instead, Bordeaux drew level on the hour mark when Hatem Ben Arfa set up former PSG youngster Adli to score with a fine first-time strike.

Earlier Marseille put their humiliating losing run in the Champions League to one side as they beat Nantes 3-1.

Florian Thauvin and Dimitri Payet scored before Dario Benedetto made it three from a penalty. Ludovic Blas pulled a goal back for Nantes.

It was a fourth straight Ligue 1 victory for Marseille, moving them up to third.

Andre Villas-Boas’s team suffered a Champions League record 13th straight defeat in the competition in midweek when they lost 2-0 at home to Porto.