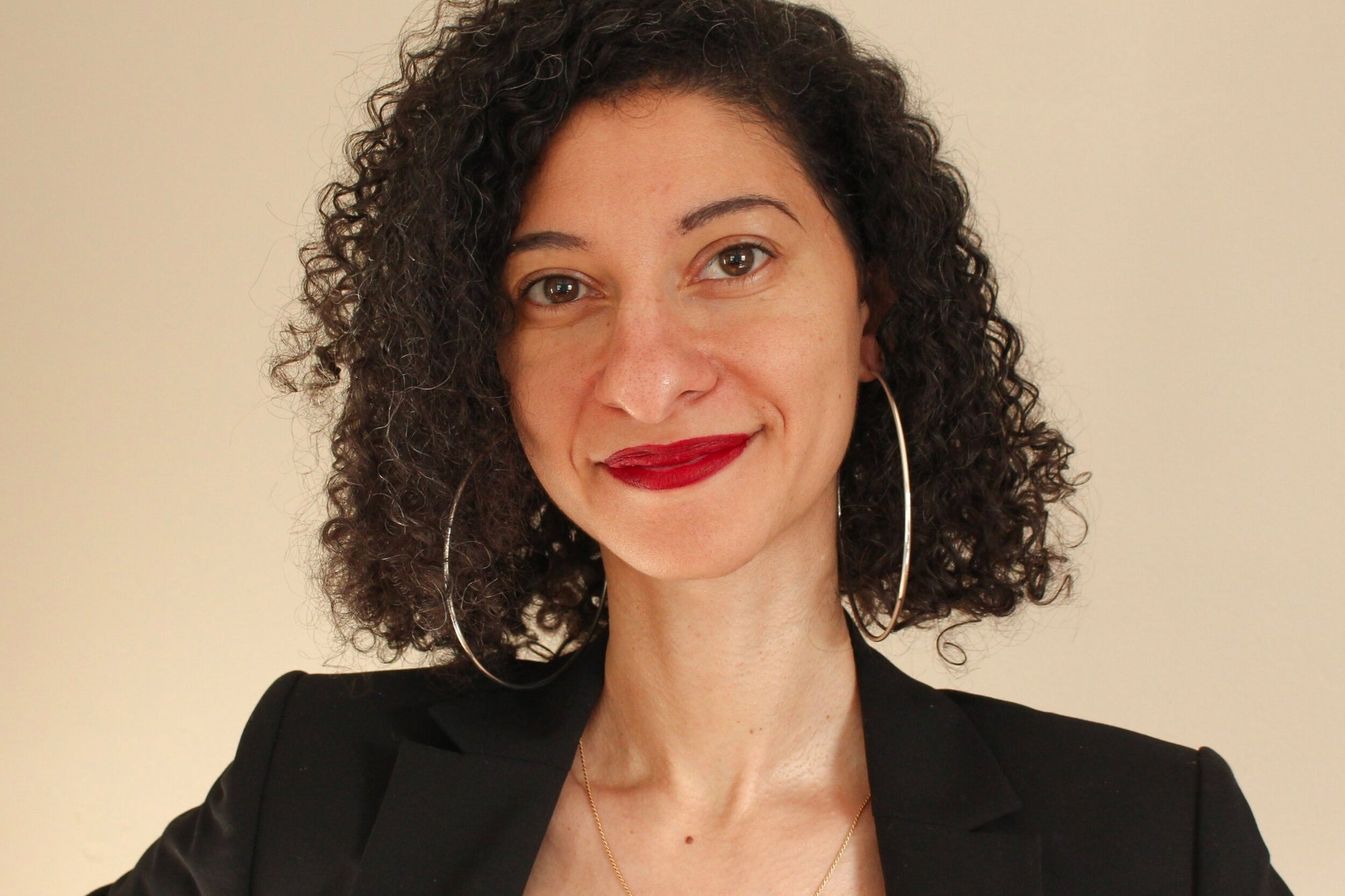 This story originally appeared on PCMag

Dr. Chanda Prescod-Weinstein spends a good amount of her research time untangling spacetime and seeking out gravitational waves. And in her forthcoming book, The Disordered Cosmos: A Journey into Dark Matter, Spacetime, and Dreams Deferred, the Harvard grad and theoretical physicist offers a modern take on the mind-bending concepts that have fascinated scientists for centuries.

Now Assistant Professor of Physics and Astronomy & Core Faculty in Women’s Studies at the University of New Hampshire, she is also pushing forward the boundaries of particle physics with her involvement in “Snowmass,” a scientific study organized by the Division of Particles and Fields (DPF) of the American Physical Society, and the NASA STROBE-X Probe Concept Study, which is part of NASA’s mission plans for the 2030s to investigate the formation, evolution, and accretion processes of black holes and more. As one might expect, Dr. Prescod-Weinstein is also a Star Trek devotee, as she explains in our recent interview.

Professor Prescod-Weinstein, an important theme running through your book is the sexism and racism inherent in science. Crucially, you take time to namecheck those who — like you — did make it through, such as Dr. Willie Hobbs Moore, Dr. Edward A. Bouchet, Dr. Elmer Imes, Professor Arlie Oswald Petters, Dr. Shirley Ann Jackson and Dr. Marcelle Soares-Santos. It is only through seeing people like oneself that one can imagine being up there too, right?
Yes, that’s valuable when you have the opportunity. But I also know that sometimes we don’t get examples like us. As far as I know, none of those people are queer, for example. It’s important then to be the person who is like yourself. I know that sounds silly, but I encourage students to get people to take pictures of themselves doing physics, so that they can see that they are indeed what a physicist looks like.

You’re also honest in the book about the dark side of science, referencing J Robert Oppenheimer and how his research led to such destruction. I’ve been out to Los Alamos, and it’s a strange place. It can’t be easy staying out of the military-industrial complex, considering so much of it funds crucial programs to this day.
It’s very hard! There are so many financial incentives. The DoD [Department of Defense] gets so much more money; there are all of these scholarships and fellowships. And then there’s how your work can be used in unexpected ways. We can’t make any guarantees, but we have to do our best to not only make ethical choices but create a culture where ethical choices are the norm for our colleagues and our society.

Your research intersects astrophysics and particle physics. But it is the latter, as you point out, that proves the “universe is always more bizarre…than we think.” Is that what makes your work so rewarding — the not knowing and always being on the possible brink of discovery?
I tend to think now more in terms of learning rather than discovery, which I think can be such a fraught word. I will be honest and say that my favorite part remains the math. I love the idea that we can describe the universe in mathematical terms. It’s interesting to me that physics has driven a lot of recent development in mathematical thought. So what’s fun to me is that the math gets more and more elaborate, and yet it’s still actually our universe! Our universe is mathematically ornate and with high frequency it is not what we might intuitively expect. I love it.

Although, as a physicist, you’re fairly convinced we’re not going to achieve warp speed anytime soon. So putting guard rails in place to protect the Prime Directive isn’t (yet) required. You must have disappointed many Trekkies at conventions with that one.
Legit, I get asked this question a lot at the Khans, as we call them, and people are regularly disappointed. But I should say people are also very thankful that I take the time to talk to them, and I’m like, “Thanks for listening to me be a nerd!” My area of research is completely dependent on the general public because we are funded by taxes, and I am so glad that we can continue to capture their imaginations and give them interesting insight into the way the universe works. I love also that we continue to dream, beyond what we think is possible. We never know what’s next, in the end.

Related: How Can You Truly Make a Difference for Black History Month?

On the plus side, other dimensions might be possible, right?
Yes, if string theory is a correct description of the universe, we live in more than four spacetime dimensions!

Growing up in East L.A., you didn’t have much access to off-world seeking telescopes, so your description of seeing the Milky Way while on a research trip to the Atacama Desert was sublime.
I think I wouldn’t have believed anyone who told me that I could see a night sky like that without the assistance of a telescope or binoculars. There were just so many stars. And I could finally see why it was called the Milky Way! To see the Milky Way like that is incredibly humbling, and it makes you realize how much capitalist industrialization has altered human traditions in a way that disconnects us from the universe of our ancestors.

Your PhD thesis was on the “cosmic acceleration problem,” and you worked on a project to address this as a postdoctoral fellow at NASA Goddard Space Flight Center. Can you briefly outline what this is, and how your approach differed from those of earlier researchers?
My PhD work was very focused on different ways of explaining cosmic acceleration that took the stance that it may be some of our first empirical hints about quantum gravity. I was particularly interested in whether ideas from the loop quantum gravity model could be deployed to explain cosmic acceleration, as well as black holes in modified gravity models that were developed to explain cosmic acceleration. It was kind of a non-traditional route because at that point everyone was already starting to work on dark energy solutions and today, the problem is called “the dark energy problem” more frequently than “the cosmic acceleration problem.” I find this annoying, frankly.

You’re not convinced that the Big Bang was as simple as some have made out?
Definitely it’s easy to get the impression that the Big Bang was a moment in time and space where everything exploded, like a bomb going off. But the truth is that we don’t really know what happened at the beginning of our spacetime bubble, if we are one bubble of many, or what. Even if there was a big bang, it happened everywhere in spacetime, not just in one place. Today, sometimes when people say “Big Bang,” they mean the era that immediately follows the universe’s earliest moments, the time period when particles start to form and interact with each other. It’s been a few years since I worked on this question, but there’s still so much we don’t know, like how the universe expanded very rapidly during the inflation era and then somehow reheated afterward. We don’t know how that happened, but we know it had to because the particle interactions that happened after require it.

Finally, as we’re still under occupation from Covid-19. How has the pandemic affected your research? Where have you been waiting out the return-to-normal (whatever that is)?
I feel very lucky that I am one of the people comparatively least impacted by the pandemic. My work can be done remotely, I have the space at home in New Hampshire to do it, my spouse and I have both remained employed, we’re childless, we have each other, and we’ve lost comparatively few people to this horrible and clearly preventable social crisis. But even I am struggling with my ability to focus because I’m worried, and I have students who are also having to deal with what has been a terrifying experience. It has changed how I mentor. Also, my collaborators haven’t found themselves in such easy circumstances, so several of my research projects have come to a halt. But of course, my university expects me to keep being productive., Also, the way we were pressured to return to campus to teach in person — I think that stressed me out so much that it ruined my ability to be very productive last summer.

As soon as we can travel safely, where will you go?
I’m most excited to return to Seoul, Korea when all of this is over, so I can visit museums and galleries. I’m also looking forward to returning to Joshua Tree. I am very disappointed that the pandemic means that there will be no in-person book tour, but I hope people will come to the amazing virtual events I have planned with bookstores in March, which will be like a roving talk show, including conversations with Kiese Laymon, Imani Perry, Elissa Washuta, Camonghne Felix and Charles Yu. I get to talk with some of my favorite authors in the world, which is an incredible pleasure. One benefit of everything being virtual is that people from around the world can join us.

Dr. Prescod-Weinstein’s book, The Disordered Cosmos: A Journey into Dark Matter, Spacetime, and Dreams Deferred, is available for pre-order now and comes out on March 9.