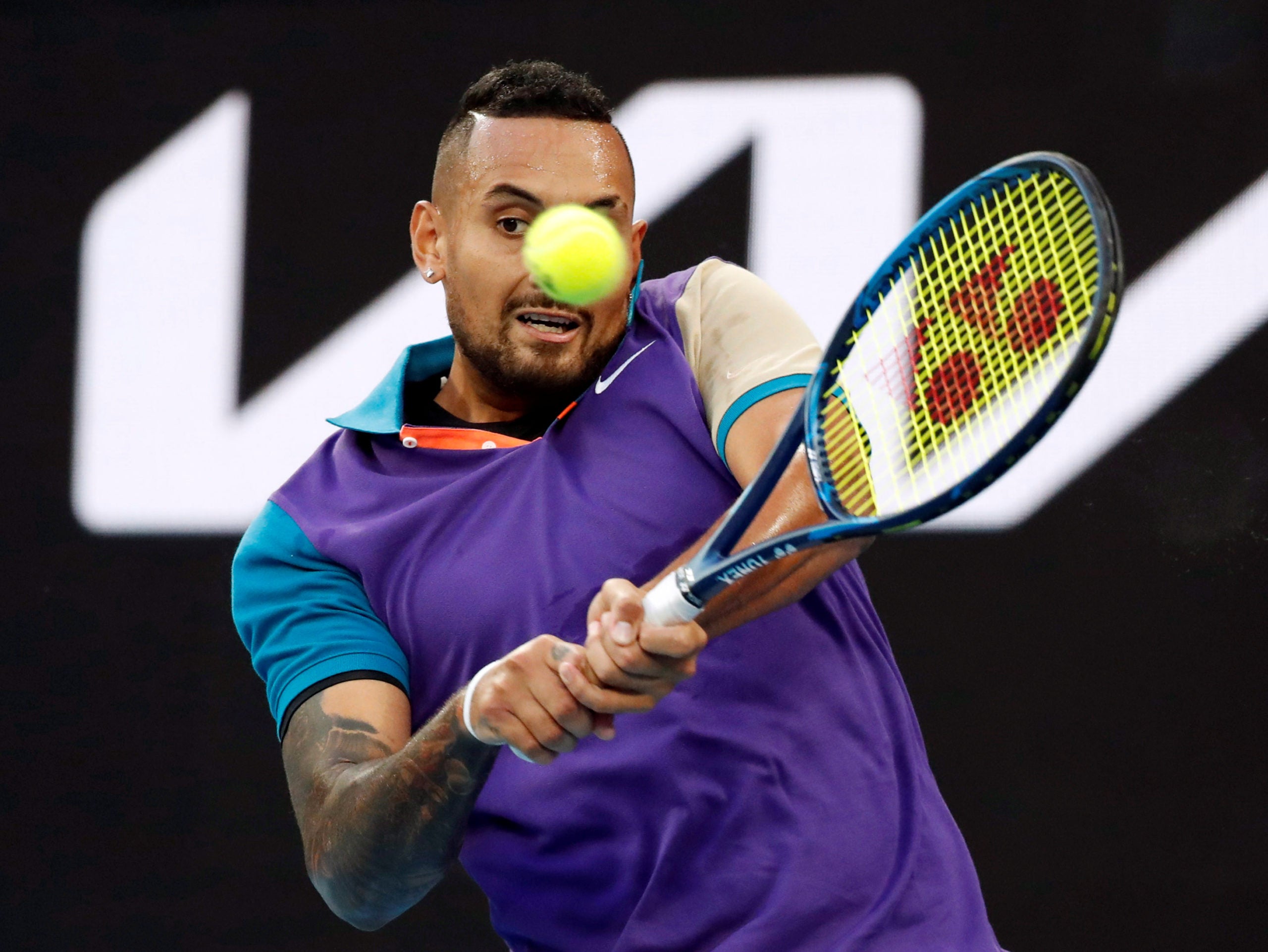 Australia’s Nick Kyrgios in action during his second round match against France’s Ugo Humbert on February 10, 2021. REUTERS/Asanka Brendon Ratnayake

MELBOURNE—- Nick Kyrgios fed off a febrile atmosphere to save two match points on his way to a 5-7 6-4 3-6 7-6(2) 6-4 comeback victory over Frenchman Ugo Humbert in the second round of the Australian Open on Wednesday.

The mercurial Australian rarely sticks around for the second week of his home major but his early round matches on his favorite John Cain Arena court are guaranteed entertainment.

Despite the restricted crowds and disappointing turnout over the first three days of a Grand Slam defined by the COVID-19 pandemic, Wednesday night proved no different.

Roared on by a crowd making up in passion for what they lacked in numbers, Kyrgios scrapped his way back into the contest time and again to secure a third-round date with U.S. Open champion Dominic Thiem.

He triggered bedlam when he dug deep to save Humbert’s match points in the fourth set and proceeded to even up the contest by dominating the tiebreak.

There were also the extras that showman Kyrgios brings to the court — an underarm serve, some exquisite shot-making and a running row with the umpire over net cord calls.

A ball fired off his racket in one moment of frustration hit the umpire’s chair and cost him a point but there was to be no denying the 25-year-old.

The crowd exploded one final time after nearly 3 1/2 hours when Humbert sent a backhand return sailing wide of the line.

“I don’t how I did that, honestly, that is one of the craziest matches I’ve ever played,” said Kyrgios.

“It was a strange match, if you guys were inside my head, there were some dark thoughts in there.

“It’s my career, I live to fight another day and hopefully I can continue to play tennis in front of you guys,” he added, to another huge round of applause from the crowd.

Kyrgios had not played for a year before the Australian Open warm-up tournaments after deciding to stay at home as the new coronavirus spread around the world and knew he would be up against it facing 22-year-old Humbert.

“He’s a heck of a player, he played amazing tennis,” Kyrgios said.

“The one thing I had was experience, my experience of playing on this court, I just put my head down and tried to make him play.”

Victory over Thiem — “You’ll kill him!” shouted one fan in the crowd — would send Kyrgios into the fourth round of the Australian Open for the third time.

“He’s one of the best players in the world,” said Kyrgios, wiping sweat from his brow.

“I’m not even going to think about that.”