‘Two countries that, for me, remain near-fictional and shrouded in mystery are Russia and Mongolia. This is perhaps a reflection on the privilege I’ve had, exploring far-flung corners of the world, or the little St Basil’s music box I was given as a child that plays hauntingly pretty Russian music, but I’d like to think it’s rooted in a deep longing, one that blurs the boundaries between mental and physical travel. Moscow’s harsh winters, its potent historical blend of extravagance and sorrow and its severity and fortitude intrigues me. It’s a world I’m itching to understand and delve into – vodka shots for coffee breaks with other Muscovites, blood-warming stews to stave off the cold and elegant belle époque buildings rubbing shoulders with brutalist hangovers from the Soviet era. There are also burgeoning alternative fashion, design and food scenes brewing in the city, which I’m eager to explore. Having watched the ballet, eaten creamy puddings from Uhvat’s pechka, or oven (featured in many Russian fairy tales), and quaffed Champagne at the Four Seasons hotel just off Red Square, I’ll hop on the Trans-Mongolian Railway to Ulan Bator, the eerily beautiful landscape soothing my hangover. From here, I’ll disappear into the Steppe and forests on horseback with Mongolian nomads.’

An incredible photo diary of Mongolia, the big sky country, by Frédéric Lagrange 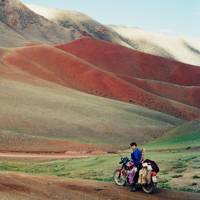 An incredible photo diary of Mongolia, the big sky country, by Frédéric Lagrange